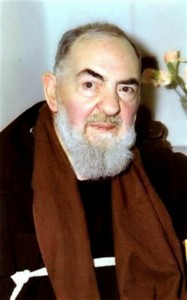 23rd September Saint  Pio  Padre pio was born of simple, hardworking  farming people on the 25th May 1887 in Pietrelcina,Southern Italy.He was tutored privately until his entry to the novitiate of the Capuchin friars at the age of 15.  Of feeble health but strong will ,with the help of grace he completed the required studies and was ordained a priest in 1910.   on the 20th of September 1918 the five wounds of our Lord’s passion appeared on his body,making him the first stigmatised priest in the history of the Catholic Church. Countless persons were attracted to his confessional and many more received his saintly counsel and spiritual guidance through correspondence.                                             His whole life was marked by long hours of prayer and continual austerity. His letters to his spiritual directors reveal the ineffable suffering, physical and spiritual,which accompanied him all through his life.  They also reveal his deep union with God,his burning love for the Blessed Eucharist and Our Blessed Lady. Worn out by over half a century of intense suffering and constant apostolic activity in San Giovanni Rotondo,Padre Pio was called to his heavenly reward on the 23rd September 1968.  After a public funeral, which attracted over 100,000 mourners,his body was entombed in the crypt of Our Lady of Grace Church..Increasing numbers flock to his tomb from all parts of the world and many testify to spiritual and temporal graces received.                                                                                Pope John Paul II canonised Padre Pio a saint on the 16th June 2002  in one of the largest attended liturgies ever in the Vatican’s history.

PRAYER FOR TRUST AND CONFIDENCE IN GOD’S MERCY   By St. Pio of  Pietrelcina.

O Lord ,we ask for a boundless confidence and trust in Your Divine Mercy,and the courage to accept the crosses and sufferings which bring immense goodness to our souls and that of Your Church. Help us to love You with a pure and contrite heart, and to humble ourselves beneath Your cross,as we climb the mountain of holiness, carrying our cross that leads to heavenly glory. May we receive You with great faith and love in Holy Communion ,and allow You to act in us as You desire for your greater glory.  O Jesus ,most adorable heart and eternal fountain of Divine Love,may our prayer find favour before the Divine Majesty of Your Heavenly Father .   Amen

This entry was posted in Uncategorized and tagged Saints of the Church. Bookmark the permalink.